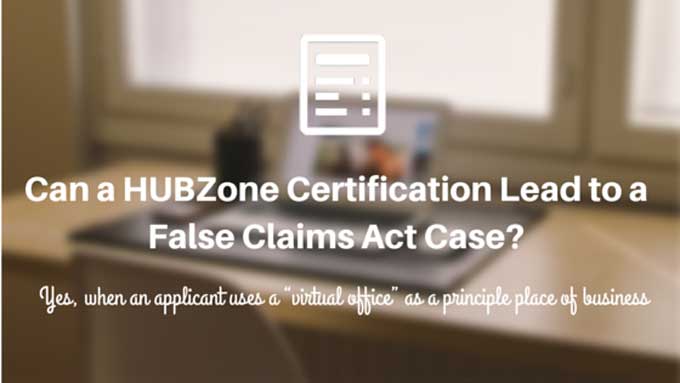 Yes, when an applicant uses a “virtual office” as a principle place of business, a HUBZone certification can be grounds for a false claims act case.

On April 8th, for example, the Department of Justice announced that a company agreed to pay $250,000 to resolve allegations that it made false statements to the Small Business Administration (SBA) to obtain certification as a Historically Underutilized Business Zone (HUBZone) company.

Purpose of the HUBZone program

The purpose of the HUBZone program is to stimulate job growth in areas that have historically had low business investment.  Under the HUBZone program, companies that maintain their principal office in a designated HUBZone can apply to the SBA for certification as a HUBZone small business company.  HUBZone companies can then use this certification when bidding on government contracts.  In certain cases, government agencies will restrict competition for a contract to HUBZone-certified companies.

False documents submitted to the government

The complaint stated that Air Ideal, a Florida-based company, and its owner, Kim Amkraut, originally applied to the HUBZone program in 2010 by claiming that the company’s principal office was in a designated HUBZone.  The complaint alleged that, in fact, this location was a “virtual office” where no Air Ideal employees worked, and that Air Ideal was actually located in a non-HUBZone location.

Allegedly, the defendants not only misrepresented the location of Air Ideal’s principal office to the SBA, but also submitted to the SBA a fabricated lease agreement and other fabricated documents for its purported HUBZone office.  The complaint further alleged that during the government’s investigation of this case, the defendants fabricated another version of its agreement for the virtual office and submitted that false document to the government.

The government also asserted that Air Ideal used its fraudulently-procured HUBZone certification to obtain contracts from the U.S. Coast Guard, U.S. Army, U.S. Army Corps of Engineers and the U.S. Department of the Interior.  Each of those contracts had been set aside for qualified HUBZone companies.

One particularly interesting thing about this case was that, in addition to paying $250,000, the defendants agreed to pay five percent of the company’s gross revenues over the next five years.  As a result, the government will essentially get a discount when doing business with this company in the future and has an added incentive to award future contracts to it.

A number of factors could influence the parties’ willingness to structure a settlement like this — such as the company’s inability to pay a larger amount, a high-degree of cooperation with the governments investigation, a company’s clean prior record, the uniqueness of its products and services, and so on. 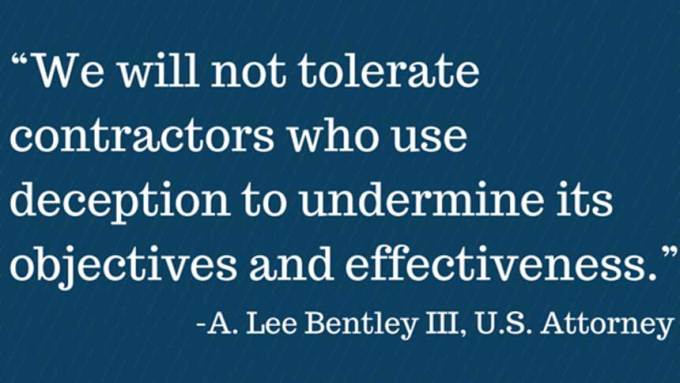 Even so, the case obviously struck a chord with the Department of Justice.  “The HUBZone program is an important tool in the government’s effort to strengthen our economy by encouraging businesses to grow in underutilized and disadvantaged areas,” said U.S. Attorney A. Lee Bentley III of the Middle District of Florida.  “We will not tolerate contractors who use deception to undermine its objectives and effectiveness.”

The Huntsville area supports a lot of procurement contracting with the federal government.  The regulations are complex, and there is keen competition for contracts.  In the event that you know that a prime contractor or subcontractor is falsifying records to the government to get an unfair advantage, there are ways to expose it.

The decision to bring a False Claims Act lawsuit is a personal one that should be made with the advisement of an attorney.  Contact me for a free consultation.