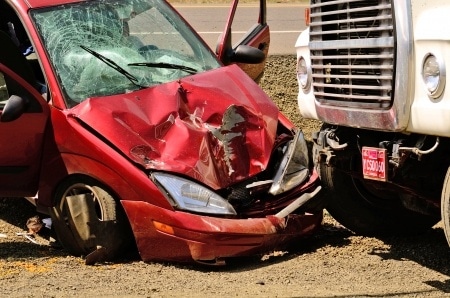 We here at Mastando & Artrip hope that you never have the misfortune of becoming the victim of a big truck wreck, but if you do, we want you to know what to do next. Big trucks – anything from 18-wheelers to large construction vehicles – are different from average cars on the road for several reasons, all of which can change the legal ramifications of a wreck they cause.

Big Trucks are Much Heavier than Cars

Big trucks are much larger and heavier than private vehicles. When in a wreck large trucks are more likely to cause serious damage or injury to drivers of smaller cars.

One in ten highway deaths occur in crashes involving a large truck. Statistics show that most deaths in large truck crashes are the occupants of passenger vehicles. According to research conducted by Insurance Institute for Highway Safety, Highway Loss Data Institute, of the nearly 4,000 people killed in large truck crashes in 2015, nearly 70 percent were passenger vehicle occupants, 16 percent were truck occupants, and the remaining 14 percent of fatalities were pedestrians, bicyclists and motorcyclists. The main problem is the vulnerability of people traveling in smaller vehicles. Trucks often weigh 20-30 times as much as passenger cars and have greater ground clearance, which can result in smaller vehicles wedging underneath trucks in crashes.

When in any wreck you need to seek medical attention for yourself or anyone potentially injured. Keep records of any treatments and bills you receive so you can be sure to get full compensation later.

Unlike a wreck between two drivers operating their own private vehicles, it can sometimes be unclear who is at fault in a big truck wreck because:

You will more than likely need an experienced lawyer’s help discovering who to look to for compensation.

Truck drivers have many laws, both state and federal, regulating their actions. For example, the driver is required to have a commercial license that allows them to operate large vehicles. If a company has hired a driver without a commercial license, you could potentially sue the company for negligent hiring practices.

Drivers must take a certain number of hours off for rest for every number of hours that they drive. Under the US Department of Transportation laws adopted in 2013, a driver may not drive more than 11 hours in a day, and must have 10 hours off for rest, as well as a 30- minute break after driving for 8 hours. If you are hit by a driver and it can be proven that they were not properly rested, it can be unclear who is at fault. If a company is not allowing drivers the 10 hours required, the company is at fault. In other cases, the driver may be failing to follow the rules set by their company and the DOT. Each case will be unique.

Heavy trucks have weight limits unique to the vehicle type. Over certain weights trucks become unsafe to drive and pose risk to others on the road. If you are hit by a truck that was overloaded, you could potentially sue the company that knowingly overfilled the truck.

The above are just a few examples, and they by no means encompass the whole of the laws that regulate big trucks. If you have been the victim of a big truck wreck, call Mastando & Artrip at 256-532-2222. We have years of experience working with car wrecks and personal injury cases, and we’ll be able to help you determine your rights.